Well that was interesting.

This was the inaugural Korean Grand Prix and it was a near thing whether it would happen at all.  The track is brand spanking new and it missed deadline after deadline.  The race wasn’t a sure thing until about two weeks before the event.  That is cutting it a bit fine if you ask me, but of course nobody did.

It was pouring down rain when the race was supposed to start.  So they delayed the start by ten minutes and declared the race would start behind the safety car instead of the usual standing start.  Just a few laps later they red flagged the race.  That means they stopped everything, and sent everybody back to the starting grid.  Then they all sat there.  For an hour.  Oh yeah, that’s compelling television.

They did finally get it started again though.  But Red Bull’s Mark Webber probably wishes they hadn’t.  On the very first lap with the green flag (without the safety car) Mark lost control of his car and wrecked it.  That ended his afternoon, and most likely ended his shot at the world championship.  He had been leading the WDC when the race started.

It rained some more, then it stopped.  There was a lot of debate about whether or not the track was dry enough for the intermediate tires or if the full wets were better.  Lewis Hamilton seemed to be having some trouble with the inters but it didn’t seem to hurt him too much.

Meanwhile Sebastian Vettel was leading the way in the other Red Bull with Ferrari’s lovely and talented Fernando Alonso in second place.  And then the racing gods smiled down on Fernando.  Vettel’s engine went kablammo with about 12 laps to go.  Alonso was winning!  AND not only that, but if he could hold on and win, he would be leading in the Driver’s Championship.  Oh.  My.  God!  It was all very nerve-wracking.  I did a lot of hand wringing, and fretting and yelled “be careful!” at the television a lot.  And you have to yell really loud when you are watching the race almost 24 hours after it took place.  I was exhausted by the end.

So Alonso won.  That is his third race win in a row for those of you keeping score at home.  Lewis Hamilton finished second, keeping his championship hopes alive for another race.  And Ferrari’s Felipe Massa came in third.

The next two races will be absolute torture to watch.  I hope I remember to breathe. 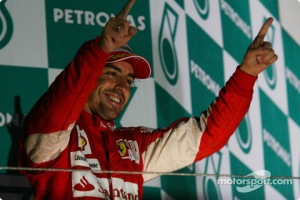 And no, it wasn’t a night race, it was just that dark when they finally finished.