It’s the Cubs home opener today.  I missed the first couple games but I don’t think I missed much.  They are 0-2 after all.  Good times.  Good times.

Anyway, I post this every year.  And it makes me cry every time I see it.  Every.  Stinking.  Time.  I am such a sucker.

I am still in the doldrums.  But now it is worse.  I did finish the sleeve of the sweater I mentioned.  I would show you a picture but it is hard to take a picture of a half finished sweater that doesn’t end up looking like a picture of a dead body.  So never mind.  You will just have to trust me.  The problem now is I made some adjustments to the sleeves so they would actually fit without being painted on tight and now I have too many stitches for the prescribed decreases.  This means I have to do math.  And at the moment, I am really not in the mood.

The doldrums are worse now because I have added another project to the mix.

This is (part of) a sock.  Specifically this is part of a Pointelle sock from knit. sock. love. by Cookie A.  This is a book I should own, but I do not.  So I checked it out of the library to knit these socks.  The problem is, I still have about 20 rows of the leg to knit on this the first sock, and I can already tell they are going to be too small around for my big fat (kind people call them athletic) calves.  This is discouraging because I have so enjoyed knitting it.  Now I don’t know what to do and this is discouraging.  So discouraging in fact that I may have to start a third project just to keep my spirits up.

I have returned from the craft fair.  I sold exactly two items.

I am just not sure how to process this

So this spring has come and gone and I have been a bad bad mommy and not recorded much of it.

Today being mother’s day the children gave me gifts.  I took them to Target on Thursday so they could pick these gifts out.  C gave me a candy bouquet.  It was a green cup filled with Junior Mints, and it had chocolate Twizzlers sticking up in it like flowers.  Delicous.  He also gave me a giant Toblerone bar and a pink carnation.

O gave me a set of three notebooks in rainbow colors.  One has lined paper, one has blank paper and one has graph paper.  She also gave me a big packet of pens.  Awesome.

Tonight we went to Hickory Park for dinner, and there was some interesting dinner conversation.  A couple examples:

O:  If I ate myself would I disappear or would I become twice as big?

C:  When I’m an adult and I do something revolutionary with science, I am going to cross animal and human DNA to give people super-powers.

Once again I can’t help but wonder what it would be like to have normal children.

I am wracked with indecision.

The Formula One season has begun.  (I can hear my mom jumping for joy).

The first race this season is in Melbourne, Australia.  This makes for some time zone gymnastics but thanks to the miraculous invention of the DVR it is not a big deal.

However I have a problem.  Because the race is in Australia, that means it is on my television starting at midnight.  Normally, I would just go to bed.  But tonight I am tempted to stay up.

This temptation has been brought on by the fact that qualifying was rained out last night.  This doesn’t happen very often, but it does happen.  Do you know what this means?  It means they will have to run qualifying before the race starts.  So that will be on NBCSports (America’s new home of F1) starting at 11.  But if I stay up to watch qualifying, I will want to stay up for the race.  And if I stay up for the race I will be up until about 3am.

I have to be at work at 7am so staying up until 3am is probably not a good idea.  But I am not sure I can resist.  Watch this space.

I have had this MacBook since 2007.  I think it is dying.  (Pause here for a moment of silence for my Buttercup).  It is slow, the keyboard does weird things, and it is getting old.  I suspect it is getting close to its best before date.

This leads me to a conundrum.

On the other hand, PCs seem so clunky, and I am not used to them anymore.  Plus, they don’t look as cool (and yes, I know how shallow that sounds).

I have been going back and forth about this for months And I am no closer to a decision.  This is driving me crazy.

It is my day off.  So that means the #1 thing to do today is go grocery shopping.

Off I go to the store.  And as I am looking at yogurt I notice they are playing The Cure on the overhead music system.  To be more specific, they were playing Friday I’m in Love.Excellent!  I used to love those guys.  And I love that song.

I was humming along, choosing yogurt flavors and thinking that the grocery store was playing some very cool music.

And then it hit me.

Maybe the grocery store is not getting cooler.  Maybe I am just getting old.

Up is down.  Black is white.  I just don’t know what to think.  The Big Game has come and gone and it was actually a good game.  That almost never happens.  Never.  But wait, there’s more.  Not only was The Big Game an entertaining football game, the commercials, sucked.  Sucked.  (sorry mom)  Yes, that’s right.  The commercials are usually the best part.  But not this year.

This was the only good one in the bunch

However, I did learn that there are many excellent movies coming up:

Apparently, I am going to be busy this spring/summer. 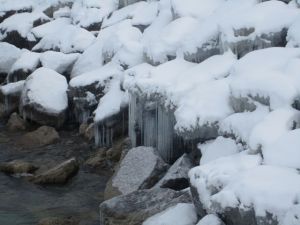 I picked the princess up at school today because she was supposed to have a riding lesson.  Wandering aimlessly in front of my car was a boy with no coat on.  Seriously?  No coat?  It is six degrees outside!  Or three!  Then I saw a girl wearing flip flops!  Flip flops!  Now I never would have worn flip flops when it was six degrees out.  Or three.  Of course part of the reason for that is my high school did not even allow sandals.  Never mind flip flops.

Now, I remember high school (I’m not that old).  I remember not wearing a hat because it would mess up my hair.  I remember not zipping up my coat so it wouldn’t cover up my outfit.  But I never would have gone without a coat.  I don’t know if I was just more sensible or just that much of a wuss.  But really, no coat?  That’s crazy talk. 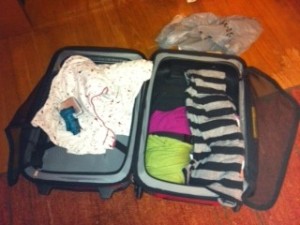 I just spent a few days (six of them actually) in Canada visiting Rick. It was a lovely trip.  But now I am home.  And now I have to unpack.

I hate unpacking.  Packing is kind of fun, in a stress-inducing kind of way.  Stress-inducing because you have to decide what outfits to bring with you.  I don’t know why I find this stressful because I wear the same things all the time.  But I do.  That is just the way I am.  I am a nervous traveller.

But there is nothing fun about unpacking.  I am always very tempted not to do it.  To just leave the clothes in my suitcase and take them out as I wear them. That way eventually all the clothes end up in the laundry (which I also hate putting away) and I have a nice empty suitcase, ready to put away all in just a few days (okay, maybe a week).

Am I the only person who does this?

What did I say?

Hey, is anybody reading this?

My Little Bit of Everything Blog
Blog at WordPress.com.
Loading Comments...